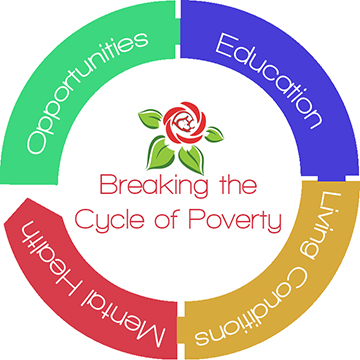 When thinking of Morocco people often envision the enchanting souks, vivid colors, beautiful artisanship, and sumptuous cuisine. Bustling Medinas, overflowing with goods and food, may give tourists the impression of a vibrant, wealthy country. These images of tourist hubs and urban areas do not tell the full story of Morocco.

Morocco has a population of around 30 million people and about 4 million live below the poverty line. The vast majority, around 70% of these poor people live in rural areas. Morocco has a very real poverty issue that disproportionately impacts vulnerable groups and rural communities.

The United Nations has developed 17 Sustainable Development Goals to transform the world by 2030, and its first goal of “No Poverty” seeks to “end poverty in all its forms everywhere.” His Royal Highness King Mohammed VI has provided strong political leadership in Morocco’s strides towards achieving this goal. Poverty rates in Morocco have significantly declined since HRH King Mohammed VI enacted the National Initiative for Human Development (NIHD) in 2005.

Demographic data demonstrates that a strong correlation exists between a country’s poverty level and the rate of abandoned orphans and street children. Approximately 60,000 abandoned children live in orphanages throughout Morocco. These children are most often abandoned due to poverty, disability and illegitimacy. Efforts to tackle poverty in Morocco have mostly focused on urban areas and people living within the tradition family structure. While these are positive trends that promise a brighter economic future for Morocco overall, the wealth disparity among regions and groups is widening.

A vast number of the abandoned children fail or drop out of school. In Morocco overall, the net enrollment rate in secondary schools is less than 44%. In rural areas only 16% of girls and 22% of boys attend school after age 12. These numbers are likely even worse for orphans. Many orphans run away or age out of the orphanages to become street children. In 2013 Morocco’s Secretary of State for Family, Solidarity & Social Action estimated that 10,000 – 30,000 street children live in Morocco. The street children often work on the street to collect rubbish, beg, or even engage in prostitution.

James Heckman, a Noble-Prize winning economist, has written extensively on the value of investments in early childhood, arguing that returns are much higher when dollars are invested earliest in a child’s life. BLOOM invests in the earliest years of life by providing orphans with early childhood development, education and mental health support; our programs build a strong foundation that breaks the cycle of poverty for Morocco’s abandoned children. 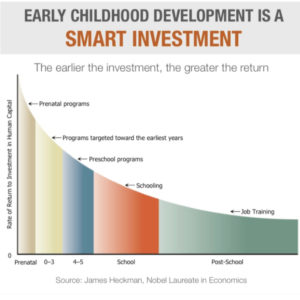 Historically, governments have invested in physical capital for economic growth. Bridges, roads and airports are built, while investments in people are compromised. World Bank Group President Jim Yong Kim has stated that the world faces a “human capital gap”, and this proves to be a great barrier to the achievement of SDG Goal 1. The World Bank and UNICEF have specifically identified human capital and future work force development as Morocco’s most critical long-term investment towards achieving SDG Goal 1. BLOOM’s investments in the early years help orphan children develop foundational skills required for success in their personal life, education and career.